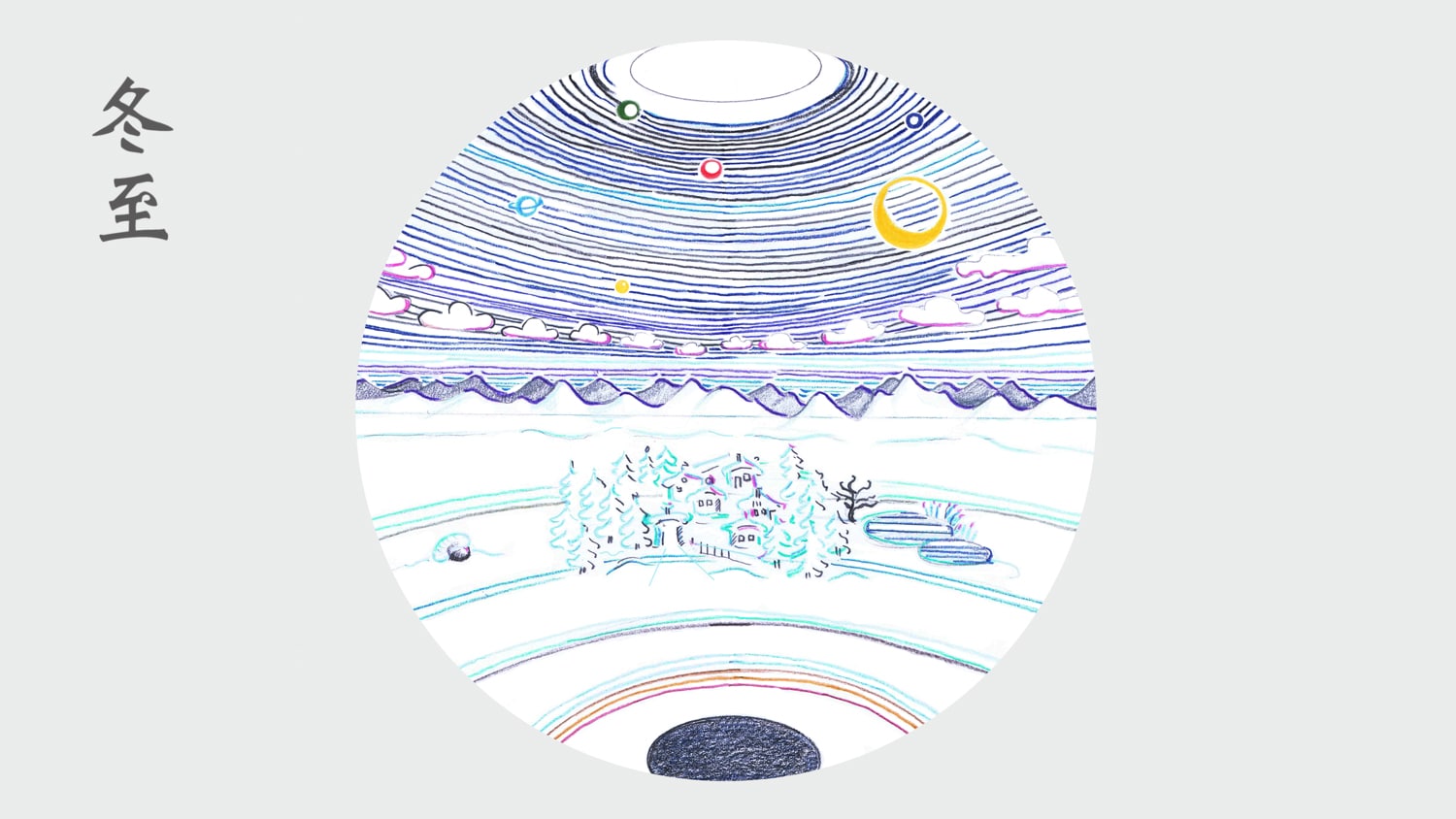 Dōngzhì, 冬至, is the 22nd solar term of the traditional Chinese moon calendar, the date for the winter solstice. The shortest day begins – and thus also the longest night. This special time given by nature is considered as important event and noticed in its meaning since ever in many cultures.

The term ‚Dōngzhì‘ means: 冬，‚Winter’, and 至，‚arrive’ and ‚The Top‘, the summit of winter. Dōngzhì represents a very clear point where Qi changes. From the winter solstice onwards, daylight grows from day to day, the yang begins to rise, increases. This is the beginning of another cycle. People therefore pay special attention to this day. This is a very good day, a great lucky day. In China, the most important holiday is the Spring Festival. The second most important is Dōngzhì.

There are always two meanings of a festival. The first one arises from the conditions and peculiarities of nature and shows us something. In this time Yin and Yang change. The second meaning lies in the sense that people put into it. They use this time to celebrate.

Nature shows us something. This level has a deeper impact and greater meaning than, for example, a tradition established by people has. Some festivals therefore have a lot to do with people’s thoughts and doing something. At this time, at Dōngzhì, something special is happening from nature. It is not made by humans, but comes from nature.

„The people must feel at this time absolutely,
what the meaning of nature is.
The Yang had fallen asleep before.
Hibernation.
But from then on it grows slowly.
Nature wakes up and we, as human beings, have slowly
to get in touch with it. Always follow nature.
Just as the Yellow Emperor says: follow the Dao.
Dao means nature – or the principle of nature.“

The Qi of Yang becomes stronger and stronger. This is very important. This means that a new cycle begins. The new cycle invites you to celebrate this day of great happiness. The new, growing Yang fits also well to the turn of the year, because with it also a new cycle begins…

This is a very important change. Because the biggest Yin-Qi has passed and the smallest Yang-Qi has appeared. The same thing happens to our human body now. We can do it just like nature: restart. We can move and dance.

We should think: How can we dance? How do we move? Not only the body, but our mind and our Qi. The Qi will move and Yang-Qi will grow.

A good time to summarize

As the last festival in 2019, Dōngzhì is a very good time to look back, reflect – and perhaps draw a conclusion. We can think about it and explore: Since the last turn of the year China and Germany have been connected in DEAN-ip. We practiced together for a year. How did we develop further? Are we making progress?

In order to go further, we have to change. This is like when a child in school develops in the first school year. It learns something for winter, spring, summer and autumn. Then the child can do something different next year, in the second school year, in every season. If, on the other hand, the child does the same every year as last year, it does not bring so much growth, then it remains in „the first grade“.

We have gained a lot of experience in one year of „international practice“. Anyone can summarize these experiences with ip and send this summary as homework to Daoming – and thus to Master Li (daoming(a)hotmail.de). Master Li looks at how each individual develops and helps.

„Look, what the meaning of your experiences is in this whole year.
Then the energy grows from year to year.
When you have gained enough experience,
I’ll show you the second grade.
If there are even more experiences,
then I’ll show you what third grade is like.“

When we gain experience and become aware of it, it acts as a reflection. This is how we recognize its essence. Through homework we show what has changed and gain clarity. Writing down and showing experiences in this way brings them „into the daylight“ in a certain way and lets us see our way better.

„All in all, it really is a very special time.
In the end, all these topics always have to do with „healing and education“,
because it always has to do with energy.
It is very important that people understand slowly,
what the Invisible is all about.“

The registration deadline has expired.
If you have any questions please contact team@dean-ip.de or call Danny: 0179-9026217.

Please transfer your amount (55 € per day incl. VAT) before the start of DEAN-ip. All further information can be found under Questions and Answers and in your registration confirmation.

Possibility to practice together in Hamburg

There is again the possibility to practice together at DEAN-ip. Therefore you can contact Elke Wohlert until 21.12.2019 at 12 o’clock. You can practice the whole time or only a part of it. Simply enter your desired times.